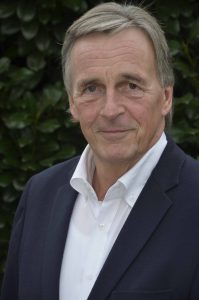 Werner Efing was born in the Rhineland in 1949. He studied law with an emphasis on international law and wrote a thesis in comparative law. He started his career with Deutsche Bank, drafting and negotiating international contracts. In the 1980s during World Energy Crisis 1 and 2 he switched to the energy sector and worked on projects in Canada, Indonesia and even Australia (coal gasification in the Latrobe Valley). The past 24 years, from 1991 to 2015, Werner was Managing Director of the Employers Association of the metal industry in Bielefeld. He negotiated contracts on tarifs with the unions and was lobbying for his associated companies on all political and social levels. He retired from this office in April 2015. He still keeps a number of functions as Head of the Board at the local Radio Station and a private museum. Werner is a Rotarian for 25 years and was President of his RC in 2002/2003. He is Governor Elect of District 1900 for 2018/2019 and has hosted many exchange students and GSE team members.
Werner loves Tennis and Golf, Skiing, Sailing and Hiking in the Alps as well as wine and good food, cooking and of course travelling. He is the singer of the band „The Rocking RoBis“ (Rotary Bielefeld!), covers songs from the 60s by the Rolling Stones and the Beatles. He is married to Vivian (57) a succesfull architect. He has two sons (34, 32), who live in Berlin and Düsseldorf.